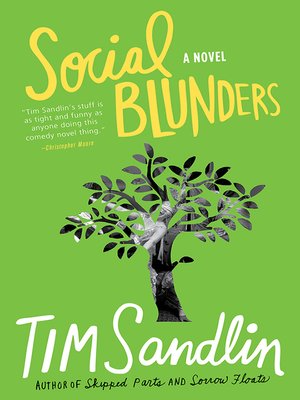 One of five men could be Sam Callahan's father. Is knowing the truth worth the havoc he'll cause trying to find out?

Laid low by divorce-the result of an endless stream of poor choices-Sam decides it's time he met his dad. But his quest to meet the men and discover the truth does more than just shake up the five likely suspects-it pretty much napalms the lives of everyone he meets.

What readers are saying about Social Blunders:

"one of the funniest writers alive."

"I am a huge fan of Nick Hornby and Richard Russo, and Tim Sandlin belongs in their club."

"Besides being hilarious and lewd (a very good start), the novel is quite touching."

"absolutely hysterical and touching. I haven't looked at treadmills the same way since!"

What reviewers are saying about Social Blunders:

"Tim Sandlin only gets better. Social Blunders is an affecting book...It is fiction to be savored." -Larry McMurtry

"A weird, funny, raunchy novel that veers wildly from pathos to slapstick and back again, and it's surprisingly effective." -Booklist