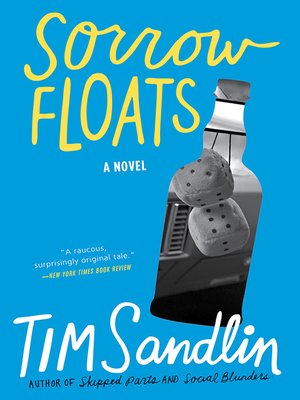 View more libraries...
"Tim Sandlin's stuff is as tight and funny as anyone doing this comedy novel thing." -Christopher Moore

Maurey has hit rock bottom, with a bottle of whiskey and an infamous reputation, she'll do anything to get out of town. Even drive two ex-drunks cross-country hauling a trailer full of illegal beer.

Everyone in GroVont, Wyoming, knows everybody else's business, but Maurey Pierce Talbot is practically famous around town.

Sunk low since her father died, whiskey - specifically Yukon Jack - is her best friend. When she makes the mistake of a lifetime, Maurey finds herself looking up from rock bottom.

So when two bumbling ex-drunks need to get cross-country with a trailer full of illegal beer, Maurey takes the wheel. Sometimes you just need to get out of town. And sometimes you need to get lost in order to get found.

What readers are saying about Sorrow Floats:

"Maurey is an appealing character; her voice is strong and clear even if her path forward isn't."

"Being a huge fan of ROAD TRIPS AND RAUNCHINESS, I absolutely loved this book."

"Sandlin really allows you to feel her anger, pain, confusion and tenderness."

"Funny, kind of wise and sentimental at the end."

"Maurey Pierce is a flawed, broken, beautiful character... it's a NOVEL ABOUT BEING ALIVE."

What reviewers are saying about Sorrow Floats:

"A zany road trip across America" -Cosmopolitan"Sandlin understands that black comedy is only a tiny slip away from despair, and he handles this walk without a misstep." -Dallas Morning News