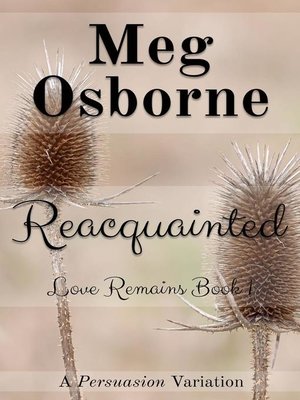 A Persuasion variation.
Returning to stay with his sister in Somerset, Captain Frederick Wentworth is doing his best to forget his last visit to that county eight years previously, which resulted in a broken engagement, and a broken heart.
When he and Anne Elliot meet by chance one morning, their ability to get properly reacquainted is curtailed when young Charles Musgrove falls from a tree. Frederick is hailed a hero, welcomed to Uppercross and immediately catches Louisa Musgrove's attention. This potential new romance ought to soothe his old hurt and allow him to properly move on, but can he forget the one woman he truly loved?
Anne had hoped to avoid all possibility of meeting with Frederick on his return, but fate has other plans. Being part of a social circle where he is a key feature does little but stir up the feelings she had thought were all but put aside. She knows he has not forgiven her, but is there a possibility they might be able to salvage at least a friendship from the connection they once shared?
Reacquainted is book one in the three part Love Remains novella series, a variation on Jane Austen's Persuasion.