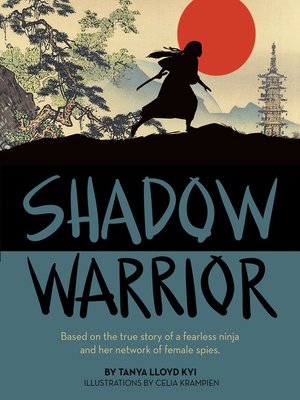 It's 1558, and warlords across Japan are battling for territory and control. Into this setting, award-winning author Tanya Lloyd Kyi weaves the stories of three people: Mochizuki Chiyome, a young woman determined to become a ninja whose plans are thwarted by an arranged marriage; Takeda Shingen (The Tiger), a fierce warlord seeking a new weapon to outsmart his enemies; and Aki, an orphaned tavern girl whose destiny is changed by a mysterious woman.

As their stories intersect, the three characters become key players in an elaborate network of undercover female ninjas who will eventually shift the balance of power in Japan.

Based on the true story of Mochizuki Chiyome and her all-female spy network, Shadow Warrior takes readers on a journey through feudal Japan, from villages to castles to battlefields. Stunning illustrations by Celia Krampien, interspersed with archival Japanese art, vividly depict the rigors of ninja training, the struggles of village life, the intensity of battle, and the thrill of accomplishing a secret mission.