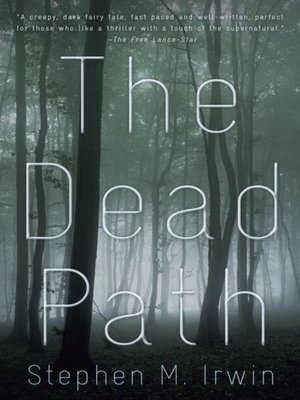 View more libraries...
Do you remember the last time a book gave you the chills? The Dead Path is the ghost story we've been waiting for.
A haunting vision in the woods sets off a series of tragic events, leaving Nicholas Close lost amid visions of ghosts trapped in their harrowing, final moments. These uniquely ter­rifying apparitions lead him on a thrilling and suspenseful ride to confront a wicked soul, and will leave an indelible mark on lovers of high-quality suspense and horror alike.
Nicholas Close has always had an uncanny intuition, but after the death of his wife he becomes haunted, literally, by ghosts doomed to repeat their final violent moments in a chilling and endless loop. Torn by guilt and fearing for his sanity, Nicholas returns to his childhood home and is soon entangled in a dis­turbing series of disappearances and murders—both as a sus­pect and as the next victim of the malignant evil lurking in the heart of the woods.
Stephen M. Irwin is the kind of debut author that readers love to discover—and rave about to all their friends. His electric use of language, stunning imagery, and suspenseful pacing are all on full display here. The Dead Path is a tour de force of wild imagination, taut suspense, and the creepiest, scariest setting since the sewers in Stephen King's It.