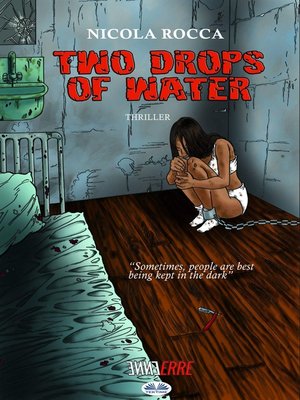 Chantal has had a disastrous year. She's lost her job and her mother, seen her father descend into alcoholism and been cheated on by the love of her life. Down on her luck, opportunity knocks when she starts chatting online to Alfredo, who offers her a job at his B&B in Tuscany.

Chantal falls for Alfredo and thinks she has found happiness again, but when she hears there is a maniac on the loose who preys on the girls who work at the B&B, she is thrust into a living nightmare.

Hundreds of miles from home and gripped with fear, Chantal must decide who to trust amid a tangled web of rumours, lies and a terrible, horrifying secret...

Chantal, or SadChantal as she's known in online chat rooms, is thirty-three. She's going through the darkest time of her life; absolutely nothing is going her way. She's out of work and living on benefits because her Economics degree is totally worthless, her father is in rehab after the death of her mother and the love of her life, Giulio, has left her for a younger woman. She's down on her luck but made of tough stuff. She can hardly make plans on €400 a month, but when she begins chatting online to Alfredo (AlfreDario74), her luck appears to change. He's looking for a factotum for the new season at his B&B in Tuscany. Chantal decides to turn her back on her old life and accepts the job. She nearly dies en route and encounters a witch-like old woman when she arrives. On eventually locating the B&B, she discovers it is totally isolated, gloomy and run-down. She wants to turn straight back around and head home, but she can't face another seven hours in the car. She resolves to go home the next day but changes her mind after meeting Alfredo. He's well-educated, polite, kind and immediately puts her at ease. What's more, he's very, very cute. As Chantal and Alfredo get to work on the B&B, they become close and begin a relationship that gradually moves beyond sex. Chantal has rediscovered herself and her joie de vivre. One day, however, her world is rocked when people in the village tell her that the B&B is cursed. A girl like her is hired every year, and every year the girl disappears. Someone is kidnapping, raping and killing these girls, and some people think it's Alfredo. Life at the B&B is no longer the same. Chantal lives in fear and keeps a close eye on Alfredo. Are the rumours true? Could the man she has fallen in love with really be a killer? Is he what he seems, or is there a monster behind the mask? Chantal decides she won't leave until she has all the answers, but it won't be easy: one false step could be her last. Two Drops of Water is a psychological thriller that plays with emotions, feelings and states of mind. Who can you trust? Who is good and who is evil? Sometimes it's impossible to tell because the two are separated by the finest of fine lines. So fine as to be imperceptible. Sometimes, evil is within us. Other times, it's in those to whom we are closest.