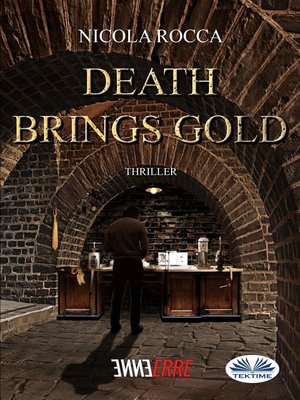 What if morning brought something other than gold?

Milan. The body of a man is found in his apartment. He is lying on the floor in an unusual position, with both his hands on his heart.

No blood, no cuts. No gunshot wounds. Only a golden necktie perfectly knotted around the victim's neck. Inspector David Walker of the Police Homicide squad is called to the murder scene.

The first clues indicate a crime of passion, but a couple of days later a similar incident occurs. Another man is found dead. Same position; same necktie around his throat.

In his mouth, a gold tag with some symbols engraved on it. Walker has no doubts: they are dealing with a serial killer. The one who the press will later refer to as 'The Necktie Killer'.

This is where the seemingly impossible task of catching a killer begins.

The investigations fail to produce any results and the killing continues...

What if morning brought something other than gold?

Milan. The body of a man is found in his apartment. He is lying on the floor in an unusual position, with both his hands on his heart, as if feeling a heartbeat that is no longer there.

No blood, no cuts. No gunshot wounds. Strangulation marks on his throat and dark bruises on his wrists. A gold coloured necktie is perfectly knotted around the victim's neck.

The case is assigned to Inspector David Walker, Milan Police Homicide Squad. At his side, assisting with the investigations is his friend, medical examiner Umberto Visconti.

The only lead they have to pursue in this case seems to be the murder weapon: a gold necktie.

Walker then contacts the Head Office of the necktie's manufacturer – a well-known brand ¬– hoping to trace its customers.

The move leads to a dead end.

Walker seeks advice from Arturo Mosetti – an enthusiastic thinker with a passion for riddles – who has in the past assisted him in solving complex cases.

Before the medical examiner has submitted his autopsy report, a second body is found in the same condition: lying in a supine position, with both his hands on his heart, dark bruises on his wrists and that unusual gold necktie around his neck.

In the second victim's mouth: something odd- a round gold tag with rough, jagged edges. With symbols engraved on its face.

The investigators return to the scene of the first murder and find another gold tag. It's identical. Only with different symbols. These symbols are a clue left by the killer, but Walker is unable to decipher the unusual code.

Only one thing is clear: both murders are the work of the same person.

The mystery deepens when it is discovered that the tags are actually made of gold.

Walker instructs his team to contact all the Jewellers and Goldsmiths of the city. Surely someone among them must know where these tags came from.

Other officers from Walker's team begin investigating possible suspects. Of particular interest, is a Mr. Merli, whose fingerprints are found at the scene of the first murder. Although Merli is in a relationship with the first victim's wife and his alibi seems to hold up, Walker keeps him under strict surveillance.

The jewellers and goldsmiths soon start providing their information regarding the tags: they are poorly handmade, an amateurish job. None of them has ever seen them for sale.

Right when the investigations appear to have stalled, a third victim is found, with the same characteristics as the previous two. The prime suspect is, once again, Merli who, a week before, had threatened to kill the victim during a violent argument with him. The investigators are on his back, waiting for him to make a wrong move.

He is under surveillance night and day, but apart from a gambling habit and his...