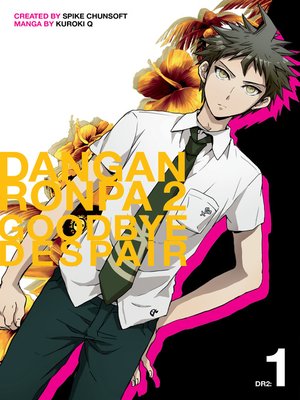 View more libraries...
High school student Hajime Hinata must be the "Ultimate" at something—after all, he got accepted to Hope's Peak Academy, which takes only the nation's elite teens (whether they're elite at being gangsters, gymnasts, or hamster breeders!).
But he doesn't know what his special talent is...only that he and his classmates have been given a surprise summer vacation on Jabberwock Island. It may be a tropical paradise, but their sinister teddy bear headmaster Monokuma still expects them all to complete their assignments if they ever want to go home—namely, murder a fellow student and get away with it, as the survivors cross-examine each other at a classroom trial!
Danganronpa 2: Goodbye Despair is an alternate version of the events told in the manga Danganronpa 2: Ultimate Luck and Hope and Despair. That series told the story through the eyes of "Ultimate Lucky Student" Nagito Komaeda; now Goodbye Despair gives you the perspective of his arch-rival in the desperate classroom murder game, Hajime Hinata!