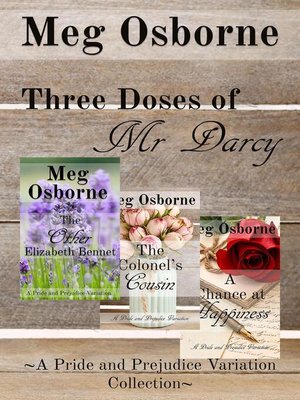 The Other Elizabeth Bennet

A case of mistaken identity threatens to keep Mr Darcy and Elizabeth Bennet apart.
Fitzwilliam Darcy generally pays little attention to London gossip, but when he hears his friend Charles Bingley is poised to make a match with the sister of the Elizabeth Bennet he has heard several troubling rumours about, he is determined to intervene. He does not anticipate meeting Elizabeth herself, or losing his own heart, in the process.
Elizabeth Bennet cannot believe Mr Darcy is poised to dislike even from their very first meeting, and is mystified by his reference to her "adventures in London" – a place she has not visited in over a year. Given the opportunity to return to the capital, she is determined to discover the truth, for despite her claims to the contrary, she finds herself caring very much what the "dreadful" Mr Darcy thinks of her...


The Colonel's Cousin
Fitzwilliam Darcy can avoid calling on his aunt, Lady Catherine de Bourgh, no loner, but he can certainly avoid doing so alone. He convinces his cousin, Colonel Fitzwilliam, into accompanying him in an effort to deflect from his aunt's incessant matchmaking, but does not foresee the presence of another obstacle in Kent – the distracting Elizabeth Bennet.
Lizzy has enjoyed her time with Charlotte and is planning to return to London to mend matters between Jane and Mr Bingley when fate sends the orchestrator of their great separation right into their path. He is not alone, though and Lizzy finds herself caught by the funny, charming Colonel Fitzwilliam. It should be simple, for his affection for her is immediately clear, yet despite the objection of Lizzy's rational mind, her heart knows what it wants, not the colonel, but his cousin.

A Chance at Happiness

"Happiness in marriage is entirely a matter of chance..."
When Charlotte Lucas married William Collins she knew it was a marriage of convenience rather than true love, but did she overestimate how happy she would be with such an arrangement? When Elizabeth Bennet goes to stay at Hunsford, she is determined to improve matters for the unhappy newlyweds, even if it means a little bit of interfering...
Fitzwilliam Darcy is summoned to Rosings at the request of his aunt and is happy enough to go, hoping that a further change of scene might keep his thoughts from straying to Elizabeth Bennet. Providence is cruel, then, in bringing them both to Kent at the same time. Or is it possible that he has been given a second chance at happiness, if only he is wise enough to take it?