Three Sisters from Hertfordshire 3-in-1 Collection 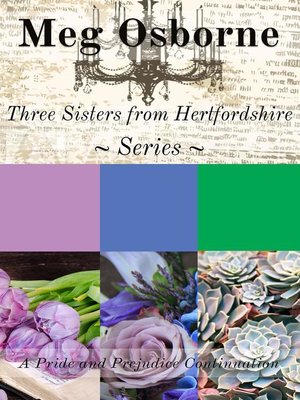 After the events of Pride and Prejudice that brought Elizabeth Bennet and Fitzwilliam Darcy together, can three other sisters find their Happily-Ever-Afters?

Mary Bennet is resigned to her life as the stay-at-home spinster daughter to her increasingly needy parents. When she receives a letter from her sister Elizabeth inviting her to stay at Pemberley, she is exceited for change, little realising what fate has in store.

Curate Robert Ashton first meets Mary Bennet when he is extracting his wayward brother from yet another inn and can hardly believe his luck when this same young lady is staying at the neighbouring Pemberley estate as the guest of Mr Fitzwilliam Darcy. He is determined to know her better, but will the interference of his brother help or hinder quiet Robert's progress?

Kitty Bennet has broken free of Longbourn and her sisters, and is enjoying all that Bath has to offer in the company of a sparkling new friend. Catching the eye of a handsome captain she feels certain that this might be her chance at a future away from Longbourn, and a chance to avoid being the last sister left unmarried.

In Bath on the orders of his doctor, Mr Matthew Knight is struggling with his sudden re-introduction to society when he crosses paths with an old friend and loses his heart to a new acquaintance, Miss Catherine Bennet. But how can an unknown gentleman with a bad leg and a cane hope to compare to a heroic captain from His Majesty's Navy?

Caroline Bingley is trapped in London with her newly-married brother and his wife, watching, miserably, as her future prospects for marriage and happiness shrink. When her brother invites a new acquaintance into their home she is immediately on her guard, for the gentleman puts her on edge, if indeed he can be called gentleman at all.

John Ashton has made it as far as London in his quest to travel abroad. He is determined not to forfeit the promise he made to his brothers in Derbyshire: he is changed, and he tarries only long enough to make arrangements for his ongoing journey. However, he does not foresee crossing paths with Mr Bingley and his wife, nor being swept into their circle, and he certainly does not foresee the amusing diversion of Caroline Bingley. The pair may not be in love, but they can certainly help one another, and doing so might change the course of both of their futures...