The Mummy, or Ramses the Damned 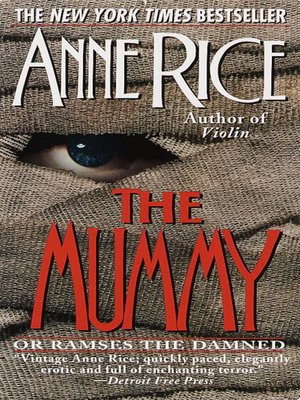 View more libraries...
NEW YORK TIMES BESTSELLER • Ramses the Great returns in this “darkly magical” (USA Today) novel from bestselling author Anne Rice
“The reader is held captive and, ultimately, seduced.”—San Francisco Chronicle
Ramses the Great lives!
But having drunk the elixer of live, he is now Ramses the Damned, doomed forever to wander the earth, desperate to quell hungers that can never be satisfied—for food, for wine, for women.
Reawakened in opulent Edwardian London, he becomes Dr. Ramsey, expert in Egyptology. He also becomes the close companion of voluptuous, adventurous Julie Stratford, heiress to a vast shipping fortune and the center of a group of jaded aristocrats with appetites of their own to appease.
But the pleasures Ramses enjoys with Julie cannot soothe him. Searing memories of his last reawakening, at the behest of Cleopatra, his beloved Queen of Egypt, burn in his immortal soul. And though he is immortal, he is still all too human. His intense longings for his great love, undiminished over the centuries, will force him to commit an act that will place everyone around him in the gravest danger. . . .