The Tale of the Body Thief 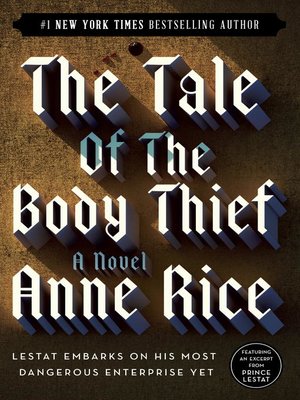 View more libraries...
In a gripping feat of storytelling, Anne Rice continues the extraordinary Vampire Chronicles that began with the now-classic Interview with the Vampire. For centuries, Lestat—vampire-hero, enchanter, seducer of mortals—has been a courted prince in the dark and flourishing universe of the living dead. Now he is alone. And in his overwhelming need to destroy his doubts and his loneliness, Lestat embarks on the most dangerous enterprise he has undertaken in all the years of his haunted existence.

Look for a special preview of Anne Rice's Prince Lestat in the back of the book. The Vampire Chronicles continue in Prince Lestat and the Realms of Atlantis, available for pre-order now.

Praise for The Tale of the Body Thief

"Tinged with mystery, full of drama . . . The story is involving, the twists surprising."—People

"Rice is our modern messenger of the occult, whose nicely updated dark-side passion plays twist and turn in true Gothic form."—San Francisco Chronicle

"Fast-paced . . . . mesmerizing . . . silkenly sensuous . . . No one writing today matches her deftness with the erotic."—The Atlanta Journal-Constitution

Fiction Horror
The Tale of the Body Thief