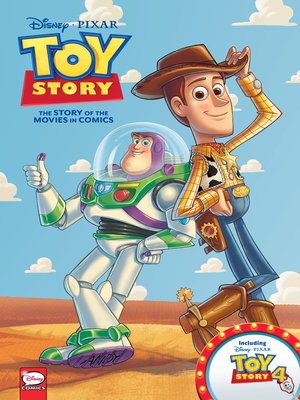 View more libraries...
Collecting over 200 pages of DisneyPixar Toy Story adaptations, this graphic novel brings the adventure, comedy, and heart of Toy Story, Toy Story 2, Toy Story 3, and Toy Story 4 from the screen to your fingertips.
Join Woody, Buzz, and all of your favorite toys, new and old, for adventure in this collection of the movies retold as comics! In Toy Story, Woody isn't the lone favorite anymore when Buzz gets introduced to Andy's room! Can the toys learn to play together? Woody's accidental ousting of Buzz leads to a rescue mission that ventures all over town. Then in Toy Story 2, Buzz must rescue Woody after he's toy-napped! Along the way they meet new friends Jessie and Bullseye and bring them back to Andy's room.
As Andy gets older and plays with the toys less, a new adventure awaits them in Toy Story 3. Left on the curb by Andy's mom, Buzz and the gang decide to donate themselves to Sunnyside Day Care. Woody tries to get them to stay, but their journey leads them to Bonnie and a new home! Bonnie's kindergarten orientation in Toy Story 4 leads to a new toy named Forky. Woody is prepared to risk everything to bring Forky back after he gets lost, and Woody reunites with an old friend! Now a lost toy, Bo Peep helps Woody carry out his mission and understand that there is more than one way to be there for a kid.