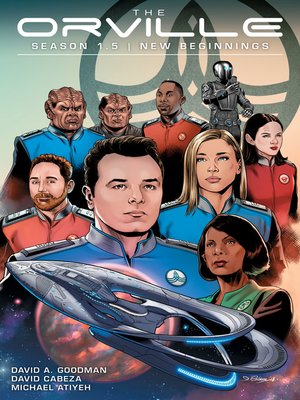 View more libraries...
The crew of the Orville continue their space explorations, encountering new alien civilizations and confronting old enemies in these stories by Executive Producer David A. Goodman!
Picking up where season one of Seth MacFarlane's space adventure TV series leaves off, this volume contains four episodic chapters:
In part 1 of New Beginnings: Ed and Gordon follow a faint distress signal belonging to a long-lost Union vessel only to end up shot down on an irradiated, war-torn desert planet in the hands of an unknown species.
In part 2 of New Beginnings: As Ed and Gordon uncover the truth of a century-old war, they fear that their eventual rescue may endanger the rest of the Orville crew. Not only does the crew's lives hang in the balance but all life on the entire planet.
In part 1 of The Word of Avis: The Orville intercepts a small Union ship en route to the interstellar territory of the easily aggravated Krill. They thought the passengers were just a simple group of xenoanthropologists, but they turn out to be something much more interesting.
In part 2 of The Word of Avis: Dragged off course and into Krill territory, the Orville crew find themselves in a battle for their lives, with threats from both outside and within.
Collects The Orville #1-#4.