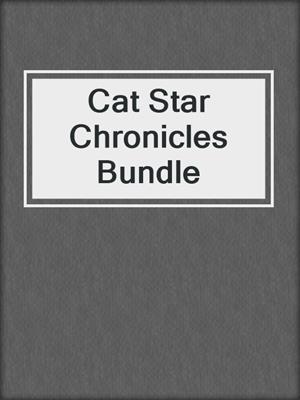 View more libraries...
The Cat Star Chronicles have taken the universe by storm, delighting readers with their sensual Zeitithian warriors and their unique special powers. As one reviewer put it, "Wow. Just...wow. The romantic chemistry is as close to perfect as you'll find" (BookFetish).

Now discover where it all started with the first three Cat Star Chronicles books for one low price. This bundle includes Slave, Warrior, and Rogue, each story a powerhouse of passion and suspense. Find out why Cheryl Brooks is the newest star of sizzling fantasy romance and lose yourself in the worlds of her rare and potent characters.

"Fascinating world customs, a bit of a mystery, and the relationship between the hero and heroine make this a very sensual romance." —Romantic Times

Slave:
"I found him in the slave market on Orpheseus Prime, and even on such a god-forsaken planet as that one, their treatment of him seemed extreme..."

Cat is an enslaved warrior from a race with a feline gene that gives him awesome beauty, fearsome strength, and sensuality and sexual prowess unmatched by any other males in the universe. Even filthy, chained, and beaten, he gives off an aura of power and virility and his feline gene gives him remarkable sensual powers.

Jacinth has spent years pursuing her kidnapped sister from planet to planet. Now her quest leads her to a place where all the women are slaves. "Jack" needs a slave of her own-one who can masquerade as her master. Enmeshed in a tangle of deception, lust, and love, they must elude a race of violent killers and together forge a bond stronger than any chains.

Warrior:
"He came to me in the dead of winter, his body burning with fever... "

Leo arrives on Tisana's doorstep a beaten slave from a near-extinct race with feline genes. As soon as Leo recovers his strength, he'll use his extraordinary sexual talents to bewitch Tisana and make a bolt for freedom...

Tisana, whose healing powers are legendary, already knows Leo's the one who can help her fulfill her destiny... she can't let him get away now. Forced together on a dangerous journey, Tisana must reveal all of her powers, and Leo must give all of himself to gain his freedom...

Rogue:
"He crawled toward me on his hands and knees like a tiger stalking his prey... "

Enslaved for years, Tychar belongs to the Queen of Darconia. His feline gene gives him remarkable sexual powers and every female on the planet is in love with him. Then, the Queen gives him to Kyra...

Does she even stand a chance? Or will she be just another one of his conquests? Why would he choose the modest piano teacher? Yet the two are drawn to each other with a powerful, magnetic attraction unlike any he's felt before... Then the palace is attacked in a coup, and Tychar has to choose between freedom and love...