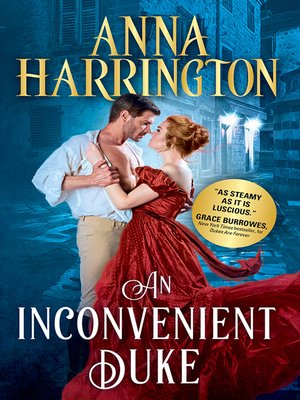 "We all make mistakes."
His sensuous lips twisted in amusement, and he murmured a bit too huskily for comfort, "Didn't feel like a mistake to me." He kept his gaze locked onto hers as he raised the glass to take a sip. "We kissed last night, and I strongly suspect that we both want to do it again." His head tilted slightly as he studied her. "If I came around this desk and took you into my arms, would you stop me?"

Marcus Braddock, former general and newly appointed Duke of Hampton, is back from war. Now, not only is he surrounded by the utterly unbearable ton, he's mourning the death of his beloved sister, Elise. Marcus believes his sister's death wasn't an accident, and he's determined to learn the truth—starting with Danielle Williams, his sister's beautiful best friend.

Danielle is keeping deadly secrets of her own. She has dedicated her life to a charity that helps abused women—the same charity Elise was working for the night she died. When Danielle's work puts her life in danger, Marcus comes to her rescue. But Danielle may not be the one in need of rescuing...