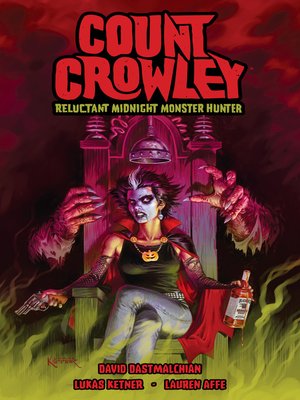 View more libraries...
Lock your doors and gather close . . . if you dare! Once a rising TV journalist, Jerri Bartman has returned to her small Midwest hometown station. Demoted to hosting the nightly Creature Feature, Jerri's professional humiliation is eclipsed by the discovery that her new job comes with a secret, supernatural duty.
Her missing predecessor, Count Crowley, was one of the last "Appointed" hunters of monsters. Yes. Monsters. They're real and they're hell bent on controlling the news and information consumed by humans. Everything we've ever been taught about monsters is a lie and Jerri's only possible advisor is a senile male chauvinist. It's 1983 and the outlook for humanity is getting . . . gnarly and their only hope is an alcoholic, acerbic horror host from Missouri.
David Dastmalchian's authorial comics debut with artist Lukas Ketner—this terrifying trade collects issues #1-#4 of the Dark Horse Comics series Count Crowley: Reluctant Midnight Monster Hunter!