The Last Christmas On Earth 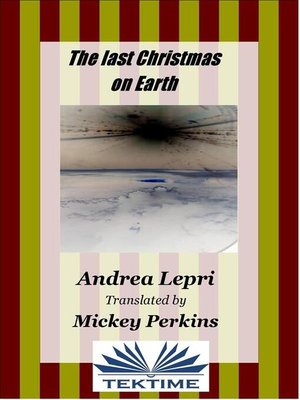 View more libraries...
The Sun seems to have suddenly decreed that Life on Earth must end. A team of scientists tries to awaken the last survivor of the Rooswell's Ufo Crash, probably the only being that can help humanity to survive. An alien breed wants to take over the entire planet, a secret expedition into the Bermuda Triangle towards Atlantis is looking for the Key that opens the Celestial Tunnels. The son of Rockland's deputy, who is fond of Egyptology, disappears for thirty hours. When he returns home he remembers nothing, the race against time has begun.

Humanity is in danger due to the increased activity of the Sun. Some scientists, flanked by Abel Parker, wake up the Gray, the last surviving alien who fell in Roswell. He is hibernated in a laboratory of Area 51, where Margareth Turner will ask him to help her decipher some disturbing mysteries. Harry, son of Deputy Sheriff James Robinson, disappears for thirty hours and when he returns home he remembers nothing. His bike shines with mysterious bluish dust, the same one that covers two corpses found the next morning in the same area. In the following days, other mysterious events occur, Harry acquires paranormal abilities, James believes that someone is watching them aiming to kidnap his son again, but he doesn't know that someone very close to him is plotting in the shadows. The corpses begin to mummify, but, before the Coroner can perform a second autopsy, the bodies disappear and with them every proof of their existence. When everything seems to be back to normal, the long-awaited Lobster's Festival begins, but a powerful virus hits the county and the much sought-after answers come to the surface one by one. The Earth enters an apocalyptic phase, the first catastrophes send the entire Humanity into a panic. The Grey explains to Margareth that an alien race "the Pleiadians" wants to take over the planet, while Abel Parker claims that the Grey wants to conquer the Earth. The President of the United States gives an ultimatum for the Grey to cooperate, he is the only one able to open the Heavenly Door and save everyone with the Vimanas, the ancient alien spaceships hidden in Tibet. A lightning storm sends the systems of Area 51 into a tailspin, Margareth and the Grey take advantage of it to escape and head to Egypt. A futuristic submarine descends into the Bermuda Triangle to reveal its mysteries. Neil Patterson, adventurer Bryan West, Aztec High Priest Pedro Ayala, and Cain Parker are part of the crew. The latter is in search of the Key that opens the Stargate, a heavenly portal that allows you to travel through time and space and that is hidden in El Giza. In the abysses, Atlantis is perfectly preserved, protected by a dome of energy. The calamities increase, some alien flying disks, allies of the Grey, try to save the people gathered in mass but are repulsed by the terrestrial air forces. Harry the child prodigy, the Grey and the Pleiadians are all in Egypt, fighting for the possession of the Stargate, while the planet and its inhabitants are dying. Who is gonna win? What's going to happen? What will be of humankind?