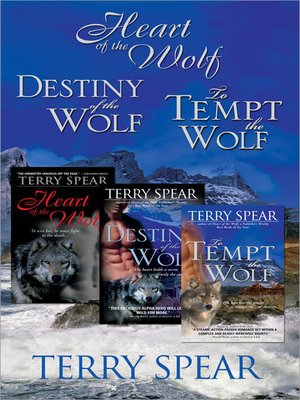 Launched with no less than a Publishers Weekly Best Book of the Year award, Terry Spear's wolf series has given thrills and chills to readers worldwide.
Now find out where it all started with the first three books in Terry Spear's series for one low price. This bundle includes the award-winning first book in the series, The Heart of the Wolf, plus Destiny of the Wolf and To Tempt the Wolf, each delivering a story that sizzles and satisfies.
"A solidly crafted werewolf story, this tale centers on pack problems in a refreshingly straightforward way." —Romantic Times, 4-star review
About the Books in This Bundle:

The Heart of the Wolf
A Publishers Weekly Best Book of the Year: "The vulpine couple's chemistry crackles off the page."
Bella is a red werewolf, sole survivor of the fire that killed her entire pack. Forced to flee her adopted gray pack when the alpha male becomes a vicious threat, she struggles to live as a lone wolf, until Devlyn, the gray male who rescued her as a pup, comes to bring her home.
When a local red werewolf goes on a killing spree, Bella and Devlyn must flee the murderer, the police and their vengeful pack leader. With the full moon rising, and her heat upon her, Bella can't resist the pull to her destined mate, even if means Devlyn will have to face the wicked alpha male in a fight to the death...
A sizzling paranormal romance based on extensive research on how wolves live and behave in the wild, The Heart of the Wolf creates a fascinating world of nature and fantasy.

Destiny of the Wolf
Lelandi Wildhaven is determined to discover the truth about her beloved sister's mysterious death. But everyone thinks she's out to make a bid for her sister's widowed mate...
Darien Silver blames himself for his mate's death. When her twin arrives in his town, he finds himself bewitched, and when someone attempts to silence her, he realizes that protecting the beautiful stranger might be the only way to protect his pack-and himself...
By Terry Spear, author of Heart of the Wolf, a Publishers Weekly Best Book of the Year, Destiny of the Wolf delivers action, adventure, suspense, and romance.
To Tempt the Wolf
Wildlife photographer Tessa Anderson must prove her brother innocent of murder charges. But when she discovers a gorgeous naked man barely alive on her beach, she's got a new world of troubles to deal with, not least of which is how he affects her with just a look, a touch, or a whispered word.
Hunter Greymore is a lupus garou, a grey werewolf. Hoping to keep a low profile at Tessa's cabin on the coast, he's drawn into her life-and into her bed. His animal instincts war with his human half, but in the end, the only thing he can do about this fascinating, adorable woman is to leave her forever -unless she becomes one of them.
From Terry Spear, author of a Publishers Weekly Best Book of the Year award winner and a Night Owl Romance Reader Choice award winner, don't miss the suspense of her thrilling paranormal romance series.