A Trio of Christmas Stories 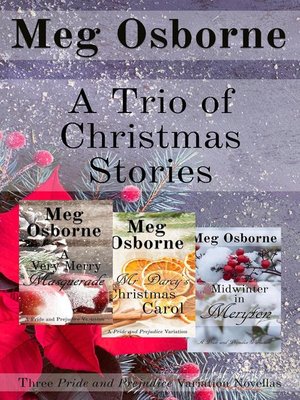 Elizabeth Bennet is furious when she discovers Mr. Darcy has removed, with Charles Bingley in tow, to London for Christmas, seeing in it a blatant attempt to undermine the relationship that had begun to flourish between Bingley and her sister. When the Gardiners invite Elizabeth and Jane to stay with them in Gracechurch Street over the festive season, she seizes on the opportunity to repair the damage Darcy has caused and reunite the lovers, little realising her own heart is in danger and from Darcy himself.

Fitzwilliam Darcy acted in the best interest of his friend in preventing an unequal match – or so he thought. Reacquainted with both Jane and Elizabeth Bennet, he is forced to acknowledge his first, hasty assessment of both sisters was utterly false. Can he salvage not only his friend's hopes of future happiness, but his own, before the year is out?

"Men's courses will foreshadow certain ends, to which, if persevered in, they must lead, but if the courses be departed from, the ends will change..." ~ Charles Dickens

Fitzwilliam Darcy is in London, and resigns himself to the social whirl of Christmas with Charles and Caroline Bingley and without mention of any young ladies with the surname "Bennet". Alas, his subconscious has other plans and he finds himself, one evening, plagued by dreams. Awaking upset at the potential futures played out in his imagination, he determines he must undo his mistakes before it is too late.

Elizabeth Bennet is surprised to see both Mr Bingley and Mr Darcy appear back in Hertfordshire so soon after they left for London, but cannot deny her pleasure at seeing them again, firstly for Jane's sake, but more reluctantly for her own. For Mr Darcy is not the only person whose nightly dreams have revealed a future they might enjoy, if only they are brave enough to act in the present...

Snow has separated one dear couple, but might it be the very thing to reunite another?

Elizabeth Bennet's Christmas is a quiet one, with heavy snowfall preventing anybody coming and going from Longbourn. She is puzzling over how to reunite her sister with Mr Bingley when Mr Darcy crosses her path, and offers to do the thing she cannot: to summon Mr Bingley back to Netherfield, and to Jane.

Fitzwilliam Darcy returned to Hertfordshire on a fleeting errand, never thinking he would find himself snowed in alone for Christmas. Surprised not to enjoy his involuntary isolation, he makes his way on foot to Longbourn, and finds in the Bennets the warmth and society he didn't know he needed.

Can a bitter Meryton winter warm his heart and lead to love?