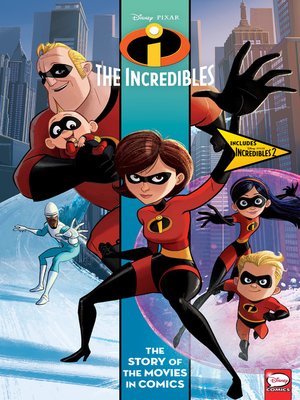 View more libraries...
Join your favorite Supers, the Parr family, for an action-packed adventure in this collection of the movies retold as comics! Collecting Disney•Pixar The Incredibles and Incredibles 2 comics, this graphic novel brings the adventure, danger, heart, humor, and heroics of the films from the screen to your fingertips!
Known to the world as heroes Mr. Incredible and Elastigirl, Bob Parr and his wife Helen were among the world's greatest crime fighters, saving lives and battling evil on a daily basis. Fifteen years later, they have been forced to adopt civilian identities and retreat to the suburbs to live "normal" lives with their three kids, Violet, Dash and Jack-Jack. Itching to get back into action, Bob gets his chance when a mysterious communication summons him to a remote island for a top secret assignment. In Incredibles 2, Helen is called on to lead a campaign to bring Supers back, while Bob navigates the day-to-day heroics of life at home with the kids. But their mission is derailed when a new villain emerges with a brilliant and dangerous plot that threatens everything.