ebook ∣ Teen Eyewitness to the Founding of the New Nation 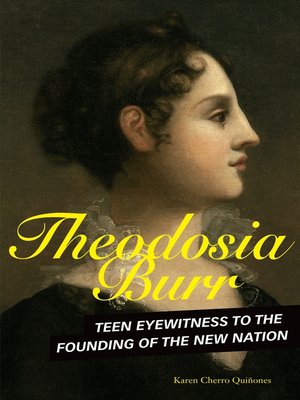 Theodosia Burr, daughter of Vice President Aaron Burr, came of age in New York City when the New Nation was growing up. She attended the inauguration of President George Washington in 1789, was at her father's side on the campaign trail and at his inauguration in 1801, attended presidential addresses to Congress, and hosted the most prominent politicians and thinkers of her time.

The Burrs' ideas about educating young women were revolutionary. Theodosia was an experiment in the equal treatment of women—regardless of social status—in education, family life, society, and the law. The family believed that women had an important role to play in the New Nation, and Theodosia was fully prepared.

Based on research at libraries and archives, and from the rich body of letters Theodosia and her family left behind, this historical narrative introduces readers to a most unusual girl who pursued a radical new path for women.