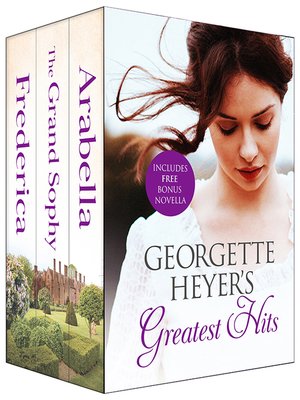 "No one has ever matched Georgette Heyer for charm and wit." —LISA KLEYPAS, New York Times bestselling author

A fresh celebration of a legendary author who has charmed tens of millions of readers with her delightful sense of humor and unique take on Regency romance. Now, get three full-length novels featuring some of Heyer's most beloved heroines, plus a delightful bonus novella from the Queen of Regency Romance's little known short story collection.

About the books in this bundle:

The Grand Sophy: When Sophy sweeps in, life will never be the same for the Ombersleys. Sophy discovers that her aunt's family is in desperate need of her talent for setting everything right: Cecelia is in love with a poet, Charles has tyrannical tendencies that are being aggravated by his grim fiancee, her uncle is of no use at all, and the younger children are in desperate need of some fun and freedom. By the time she's done, Sophy has commandeered Charles's horses, his household-and maybe even his heart.

Arabella: Arabella never would have pretended to be rich if that odious Robert Beaumaris hadn't insulted her, practically to her face. Now she has to keep up the subterfuge, even when it gets her into more trouble than she bargained for. How is she ever going to tell Robert the truth? Or does he already know her shocking secret?

Frederica:The lovely, competent, and refreshingly straitforward Frederica is determined to secure a brilliant marriage for her beautiful sister and seeks out their distant cousin, the Marquis of Alverstoke, for his society connections. Frederica makes such a strong impression that to his own amazement, the Marquis agrees to help. Normally wary of his family, Lord Alverstoke does his best to keep his word while keeping his distance. But with his enterprising  and altogether entertaining  country cousins getting into one scrape after another, before he knows it the Marquis finds himself dangerously embroiled.

To Have the Honor (novella): Young Lord Allerton returns home from the Napoleonic Wars to find his father has left the family bankrupt. His mother's solution: marry his wealthy cousin. But the Viscount would sooner have his beloved Harriet marry whom she chooses than be reduced to accepting a proposal from his financially compromised position.