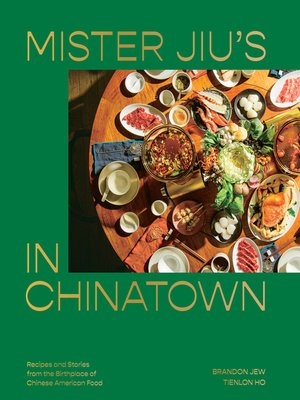 View more libraries...
JAMES BEARD AWARD WINNER • The acclaimed chef behind the Michelin-starred Mister Jiu’s restaurant shares the past, present, and future of Chinese cooking in America through 90 mouthwatering recipes.

ONE OF THE TEN BEST COOKBOOKS OF THE YEAR: The New Yorker, San Francisco Chronicle • ONE OF THE BEST COOKBOOKS OF THE YEAR: Glamour • “Brandon Jew’s affection for San Francisco’s Chinatown and his own Chinese heritage is palpable in this cookbook, which is both a recipe collection and a portrait of a district rich in history.”—Fuchsia Dunlop, James Beard Award-winning author of The Food of Sichuan

Brandon Jew trained in the kitchens of California cuisine pioneers and Michelin-starred Italian institutions before finding his way back to Chinatown and the food of his childhood. Through deeply personal recipes and stories about the neighborhood that often inspires them, this groundbreaking cookbook is an intimate account of how Chinese food became American food and the making of a Chinese American chef.

Jew takes inspiration from classic Chinatown recipes to create innovative spins like Sizzling Rice Soup, Squid Ink Wontons, Orange Chicken Wings, Liberty Roast Duck, Mushroom Mu Shu, and Banana Black Sesame Pie. From the fundamentals of Chinese cooking to master class recipes, he interweaves recipes and techniques with stories about their origins in Chinatown and in his own family history. And he connects his classical training and American roots to Chinese traditions in chapters celebrating dim sum, dumplings, and banquet-style parties.

With more than a hundred photographs of finished dishes as well as moving and evocative atmospheric shots of Chinatown, this book is also an intimate portrait—a look down the alleyways, above the tourist shops, and into the kitchens—of the neighborhood that changed the flavor of America.