A Throne for Sisters 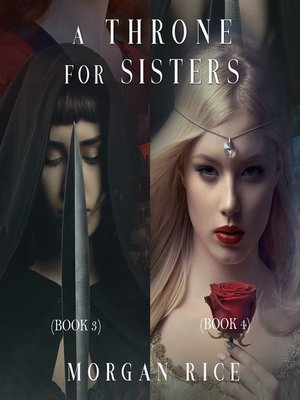 A bundle of books three and four in Morgan Rice's new fantasy series A THRONE FOR SISTERS (A SONG FOR ORPHANS and A DIRGE FOR PRINCES). Here are two bestselling novels, all in one convenient file. Over 150,000 words of reading, all for an incredible price—it also makes the perfect gift!

In A SONG FOR ORPHANS (A Throne for Sisters—Book Three), Sophia, 17, journeys in search of her parents. Her quest takes her to foreign and strange lands—and to a shocking secret she could never imagine. Kate, 15, is summoned by the witch, as her time has come to repay the favor. But Kate is changing, coming of age, become ever more powerful—and what will become of Kate if she makes a deal with darkness? Sebastian, a romantic, follows his heart, throwing it all away to reject his family and find Sophia. But Lady D'Angelica is still bent on killing her—and may have other plans.

In A DIRGE FOR PRINCES (A Throne for Sisters—Book Four), Sophia battles for her life, trying to recover from the wound left by Lady D'Angelica. Will her sister Kate's new powers be enough to bring her back? The ship sails with the sisters to the distant and exotic lands of their uncle, their last hope and only known connection to their parents. Yet the journey is treacherous, and even if they find it, the sisters don't know if their reception will be warm or hostile. Kate, indentured to the witch, finds herself in an increasingly desperate situation—until she meets a sorceress who may hold the secret to her freedom. Sebastian returns to court, heartbroken, desperate to know if Sophia is alive. As his mother forces him to marry Lady D'Angelica, he knows the time has come to risk it all.

A THRONE FOR SISTER is a dazzling new fantasy series rife with love, heartbreak, tragedy, action, adventure, magic, sorcery, dragons, fate and heart-pounding suspense. A page turner, it is filled with characters that will make you fall in love, and a world you will never forget.

Book #5 in A THRONE FOR SISTERS will be released soon!