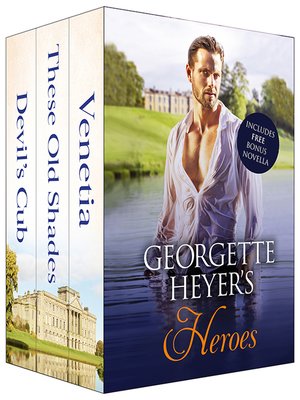 A fresh celebration of a legendary author who has charmed tens of millions of readers with her rapier wit, brilliant characterizations, and unique take on Regency romance. Now, get three full-length novels featuring some of Heyer's most splendid heroes, plus a delightful bonus novella from the Queen of Regency Romance's little known short story collection.

About the books in this bundle:

Venetia:
Venetia Lanyon lives an independent but secluded life running her family's estate, until she meets her notorious neighbor: Jasper, Lord Damerel. Exiled at his country estate for his rakish ways, Damerel never expects to find a hidden gem like Venetia so far from London. What begins for him as a harmless flirtation becomes much more, and the two are on the verge of a damaging scandal. For meeting Damerel has awakened in Venetia desires she never dreamt she possessed, and she'll be drawn out of her reclusive existence by the very type of man a well-bred lady should avoid.

These Old Shades:
Justin Alistair, His Grace the Duke of Avon, is a dangerous man to cross. Nicknamed "Satanas" for his wild and unscrupulous ways, he has waited 20 years to get revenge on his arch-enemy. The means to do so falls serendipitously into his hands in the person of a fiery red-head whose nobility is scarcely disguised by a harsh and abusive upbringing. First the Duke's servant, and later his ward, Leonie Bonnard adores, challenges, and provokes the Duke, never guessing that she's going to be at the center of a public confrontation that will shock the world. Set in the years before Prinny became Regent, Heyer delivers an unusual hero you will never forget.

Devil's Cub:
The acclaimed sequel to These Old Shades delivers non-stop action and the delight of seeing just what happened to Leonie Bonnard and the Duke of Avon. Mary Challoner tried to trick fiery Dominic Alistair, Marquis of Vidal, to prevent him from running off with her sister. Now he's discovered her subterfuge, and he's not one to take this kind of thing lightly. A kidnapping ensues, but Mary has a few more shocking stratagems up her sleeve, and it seems that Dominic, the Devil's Cub, may have finally met his match.

Pistols for Two (novella): Two best friends at odds over plain little Marianne Treen, who is no longer plain and has grown into a stunning young lady. A spilled drink and a squashed toe, and Jack and Tom find themselves facing each other with pistols at dawn. Brimming with characteristic wit and colorful characters, Heyer brings to life all the romance, intrigue, gallantry, villainy and grace of the Regency period.