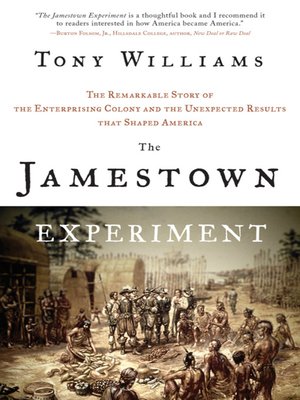 The American dream was built along the banks of the James River in Virginia.

The settlers who established America's first permanent English colony at Jamestown were not seeking religious or personal freedom. They were comprised of gentlemen adventurers and common tradesmen who risked their lives and fortunes on the venture and stood to reap the rewards—the rewards of personal profit and the glory of mother England. If they could live long enough to see their dream come to life.

The Jamestown Experiment is the dramatic, engaging, and tumultuous story of one of the most audacious business efforts in Western history. It is the story of well-known figures like John Smith setting out to create a source of wealth not bestowed by heritage. As they struggled to make this dream come true, they would face relentless calamities, including mutinies, shipwrecks, native attacks, and even cannibalism. And at every step of the way, the decisions they made to keep this business alive would not only affect their effort, but would shape the future of the land on which they had settled in ways they never could have expected.

The Jamestown Experiment is the untold story of the unlikely and dramatic events that defined the "self-made man" and gave birth to the American dream.

Tony Williams taught history and literature for ten years, and has a master's in American history from Ohio State University. He wrote Hurricane of Independence and The Pox and the Covenant, and is currently a full-time author who lives in Williamsburg, Virginia, with his wife and children.