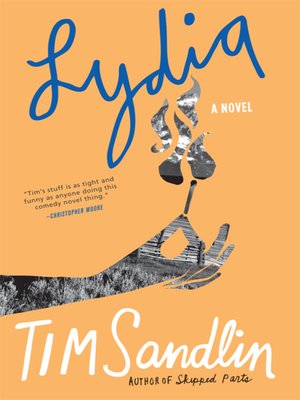 LYDIA, Tim Sandlin's acclaimed return to his GroVont characters, was called "Uplifting...immensely satisfying" by the New York Times Book Review and a "gem of a novel as audacious as it is sentimental" in a starred Booklist review.

Managing the Virgin Birth Home for Unwed Mothers means the women in Sam Callahan's life keep his world interesting. But it's his family members that really take the cake. His daughter may be having a nervous breakdown, and his mother's just out of prison for attempting to poison the president's dog. And when they hit the road with a geriatric, an adoptive son trying to discover his parentage, and an enraged psychopath on their tails, all hell may break loose. And you thought your family was strange...

Fifteen years ago, Tim Sandlin concluded his "GroVont" trilogy, a string of books that included a New York Times Notable Book and earned such accolades as "funny and compelling" (LA Times), "zany" (Cosmo), and "dazzling and moving" (New York Times). But some characters call a writer back.

Welcome to the ribald, rollicking, and sometimes peculiar world of Tim Sandlin's GroVont, Wyoming, where family is always paramount, no matter how strange.