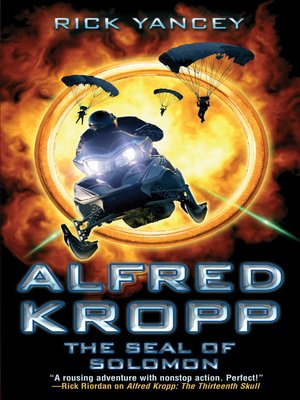 View more libraries...
Before The 5th Wave, there was Alfred Kropp. This second book in Rick Yancey's lauded series was called a "rip-roaring story that teens will love" in School Library Journal's starred review.
Things have just settled down for Alfred, when he's suddenly kidnapped and forced to face a terrible threat—the Seal of Solomon. For millennia, the fallen angels of heaven were controlled by the ring. Now the ring has been stolen, and if it's not recovered, all hell will break loose . . .
Packed with thrills and laughs on every page, the second book in New York Times bestselling author Rick Yancey's series proves once again that heroes can come from anywhere, and anyone. Perfect for fans of James Patterson!
Praise for The Extraordinary Adventures of Alfred Kropp:
A Publishers Weekly Best Children's Book of the Year
Carnegie Medal nominee
Book Sense Children's Pick