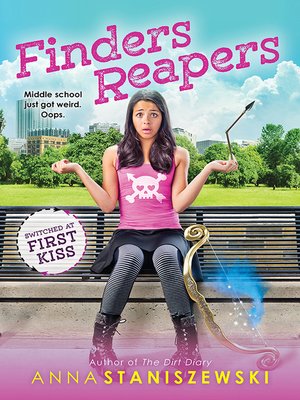 Marcus is a Cupid. Lena is a Reaper. Opposites attract in book 2 of the adorkable Switched At First Kiss series by the acclaimed author of The Dirt Diary.

Lena's not ready for any more supernatural surprises. Her new boyfriend, Marcus, is a cupid. She's a soul collector ("reaper" just sound so harsh). And they just got their powers un-swapped. But things aren't as back to "normal" as they seem...

On his next assignment, Marcus's "love boost" is a little too powerful. (Baby talk is so annoying.) And Lena's soul sort of...escapes. The cause? Lena and Marcus's powers are still intertwined! Their emotions are affecting each other's power. So, basically the fate of the world depends on them getting along in their brand new romance. (Okay, just love and death, but still.)

Praise for I'm With Cupid:

"Readers are in for a wild and hilarious ride." Booklist

"Staniszewski provides a deft mix of comedy and sensitive, deeper themes, making her book not only entertaining, but one that offers wisdom."-Kirkus Reviews