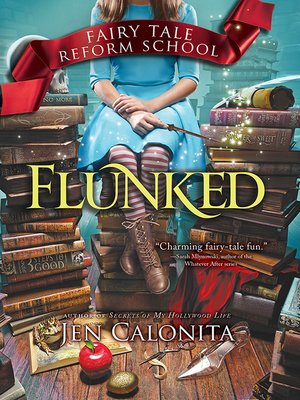 Would you send a villain to do a hero's job?

Flunked is an exciting new twisted fairy tale from the award-winning author of the Secrets of My Hollywood Life series. "Charming fairy-tale fun." –Sarah Mlynowski, author of the New York Times bestselling Whatever After series.

Gilly wouldn't call herself wicked, exactly...but when you have five little brothers and sisters and live in a run-down boot, you have to get creative to make ends meet. Gilly's a pretty good thief (if she does say so herself).

Until she gets caught.

Gilly's sentenced to three months at Fairy Tale Reform School where all of the teachers are former (super-scary) villains like the Big Bad Wolf, the Evil Queen, and Cinderella's Wicked Stepmother. Harsh. But when she meets fellow students Jax and Kayla, she learns there's more to this school than its heroic mission. There's a battle brewing and Gilly has to wonder: can a villain really change?

"Fairy Tale Reform School is spellbinding and wickedly clever. Gilly is smart, spunky, and a hilarious narrator, and I cannot wait to read about her next adventure!" –Leslie Margolis, author of the Annabelle Unleashed novels and the Maggie Brooklyn mysteries

"Fairy Tale Reform School is a fresh and funny take on the enchanted world. (And who hasn't always wanted to know what happened to Cinderella's stepmother?)" –Julia DeVillers, author of the Trading Faces identical twin series and Emma Emmets, Playground Matchmaker