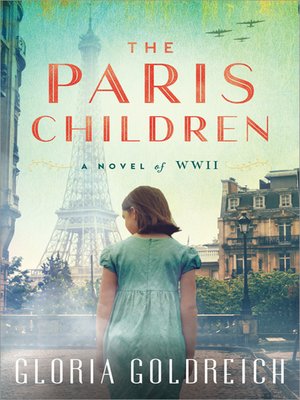 "Atmospheric and immersive, The Paris Children is an extraordinary, rich novel that will leave a powerful mark on readers' hearts."—Kim Michele Richardson, New York Times bestselling author of The Book Woman of Troublesome Creek

Inspired by the true story of one woman's fight to survive during the 20th century's darkest hour—World War II—Gloria Goldreich presents a story of love and resistance against all odds.

Paris, 1935. A dark shadow falls over Europe as Adolf Hitler's regime gains momentum, leaving the city of Paris on the brink of occupation. Young Madeleine Levy—granddaughter of Alfred Dreyfus, a Jewish World War I hero—steps bravely into a new wave of resistance women and becomes the guardian of lost children.

When Madeleine meets a small girl in a tattered coat with the hollow look of one forced to live a nightmare—a young Jewish refugee from Germany—she knows that she cannot stand idly by. Madeleine offers children comfort and strength while working with other members of the resistance to smuggle them out of Paris and into safer territories.

As the Paris Madeleine loves is transformed into a theater of tension and hatred, many are tempted to abandon the cause. Amidst the impending horror and doubt, Madeleine and Claude, a young Jewish Resistance fighter who shares her passion for saving children, are drawn fiercely together. With a questionable future ahead of them, all Madeleine can do is continue fighting and hope that her spirit—and the nation's—won't be broken.

A remarkable, panoramic book of resistance during World War II, The Paris Children is a story of love and the power of hope and courage in the face of tragedy.

Praise for The Paris Children:

"In The Paris Children, real-life Resistance fighter Madeleine Levy steps out from behind her famous grandfather, French political figure Alfred Dreyfus, to claim her own legacy of patriotism as she battled against anti-semitism in World War II. Author Gloria Goldreich shares the inspiring tale of Madeleine's brave and dangerous rescue of French children and the bittersweet nature of her ultimate sacrifice."—Marie Benedict, New York Times bestselling author of The Mystery of Mrs. Christie

"In Gloria Goldreich's magic hands, this true story becomes a beautiful, imaginative retelling of an extraordinary woman's life. With her fine images and perceptive insights, Goldreich captures a dark era—and the human goodness that illumined it."—Francine Klagsbrun, author of Lioness: Golda Meir and the Nation of Israel

"A page-turning and inspiring story of how courage and family ties can survive even the worst of evil."—New York Journal of Books