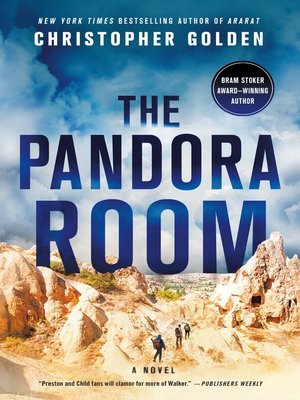 "A wonderful, wild ride." —Michael Koryta, New York Times Bestselling author of How It Happened and If She Wakes
From the New York Times bestselling and Bram Stoker Award-winning author comes the sensational new novel that turns ancient lore into a modern-day horror. In one variation on the myth of Pandora's Box, there were two jars, one for Pandora and one for her sister. One contained blessings of the gods, the other all the world's curses...
Archaeologist Sophie Durand has spent her life studying ancient mythology and languages. Years of work have led her to the greatest discovery of her career, a subterranean city deep in the heart of Northern Iraq. When Sophie's team uncovers a secret chamber whose walls are covered in cuneiform, along with a warning from Alexander the Great, history and mythology begin to merge. The writings confirm the Pandora tale of two jars, but the chamber guards only one. It's a find that could make history, or start a war.
Weird-science expert Ben Walker is called in as the mystery grows ugly. Those who believe the myth want to know which jar was found, the one containing blessings or the one full of curses. Governments rush to lay claim, but jihadi forces aren't waiting for the dust to settle. Whatever the jars contain, they want it, no matter the cost. For Sophie, Walker, and the others, the Pandora Room may soon become their tomb.
In a novel that breathes new life into the supernatural thriller, Christopher Golden's pulse-pounding tale is not to be missed.