Romanticised History of the War of Troy

ebook ∣ A Novel Freely Based On The Iliad Of Homer 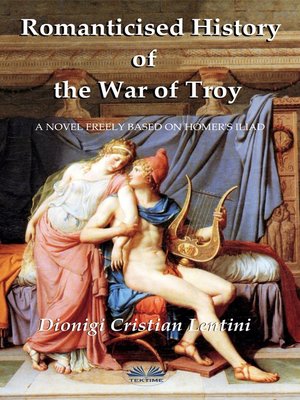 View more libraries...
The fascinating historical-mythological epic, with its enormous weight of pain and death, but over all the splendid timeless scenes of the Trojan War.

The fascinating historical-mythological epic, with its enormous weight of pain and death, starts with a simple love triangle whose sides are: Elena, "femme fatale" ante litteram of the Homeric legend; Paris, hero in possession of a classic virile charm; Menelaus, pale ruler of Sparta, overwhelmed by the continuous confrontation with his valiant brother Agamemnon. The meeting between these characters creates a destiny that is filled with pathos: Paris, son of King Priam and who is madly in love with Helen, escapes with her; Menelaus, former husband of Helen, is blinded by jealousy and lust for revenge, will declare war on Troy, beginning a ruinous tragedy that will last ten years. Around this central nucleus, infinite events come to life that are linked by invisible Fate, now tangling now dissolving: unfathomable and mysterious, the true deus ex machina of Greek mythology, Fate exceeds, with its absolute determinism, even the will of the gods. In this fictionalized version of the Trojan epic, the author seems to already know that readers will remain, in spite of themselves, ensnared by the plot and that, like children placed in front of a fairy tale, at the end of each chapter they will ask with irrepressible curiosity: "And then ?".