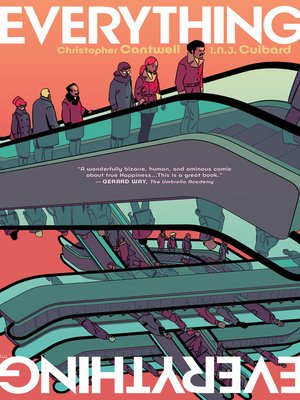 View more libraries...
The mind-blowing second volume of the hit series from Christopher Cantwell (AMC'S acclaimed Halt and Catch Fire, She Could Fly) and I.N.J. Culbard (The New Deadwardians, Brink)!
Things in Holland, Michigan are stranger than ever: while some of the townspeople fall deeper into the mysteries of the disturbingly alluring and increasingly inescapable Everything mega-store, a growing array of renegade citizens form an underground resistance against its masters. Murky answers to bizarre questions finally surface... who, or what, is really in control of Everything... and why? Monstrous villains will be revealed, all out war will explode out into the parking lot, and deep beneath the store, the remaining few will venture forth into an unfathomable—maybe even inhuman—horizon as the American Dream gets derailed in a nightmarish turn.
Collects Everything #6-#10.
"A wonderfully bizarre, human, and ominous comic about true Happiness... And like a lot of my favorite comics, it just throws you right into the action and weirdness, and builds a real momentum until all is revealed. This is a great book."—Gerard Way, The Umbrella Academy
"Everything crawls deep under your skin and sits with you long after you put it down. A strange and beautiful evisceration of this hyper-commodified world we live in. Trust me, you don't want to miss out on this one."—James Tynion IV, Batman, Something is Killing the Children
"A book to be cherished. Cantwell and Culbard have crafted a uniquely surreal American horror - a story that guides you to the oasis between the eldritch and the mundane, good intention and desperate cruelty, nothing... and everything."—Jackson Lanzing, Star Trek: Year Five
"Like all great sci-fi, Everything takes the existing world and pushes it several smart terrifying steps forward. An incisive modern commentary that will leave you thoughtful and questioning your world in the best of ways."—Kelly Thompson (Captain Marvel, Hawkeye)