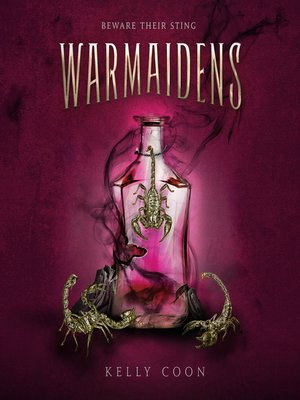 Warmaidens is the action-packed conclusion to the heartwrenching Gravemaidens fantasy duology. Kammani and the maidens are now going to war against the ruler who tried to entomb them.

Just a few moons after escaping the tomb in Alu, Kammani and the other runaway maidens have found refuge in the city-state of Manzazu. There, Kammani has become a respected healer, especially among the warriors she’s brought back from the brink of death. Now that the nightmares of Alu are fading, she can finally decide whether or not to take Dagan’s hand in marriage.

But when an assassin murders a healer he believes is Kammani and attempts to kill the displaced queen of Alu, the maidens realize they’ve been found.

Hungry for revenge, Manzazu’s queen wants to strike back at Alu with her fiercest weapons—her scorpion warrior maidens—but Kammani knows that war harms more than it heals. To save the innocents and any chance of a future with Dagan, Kammani must take down Alu’s ruler before their lives burn up in the flames of war.