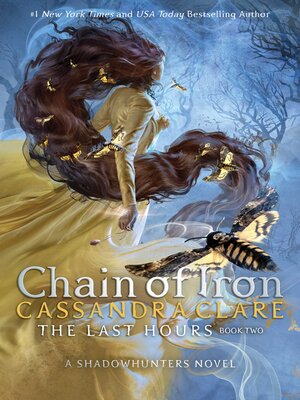 The Shadowhunters must catch a killer in Edwardian London in this dangerous and romantic sequel to the #1 New York Times bestselling novel Chain of Gold, from New York Times and USA TODAY bestselling author Cassandra Clare. Chain of Iron is a Shadowhunters novel.
Cordelia Carstairs seems to have everything she ever wanted. She's engaged to marry James Herondale, the boy she has always loved; she has a new life in London with her best friend Lucie; and she bears the sword Cortana, a legendary hero's blade.

But the truth is far grimmer. Cordelia's marriage is a lie, arranged to save her reputation, while James remains in love with the Grace Blackthorn. Cortana burns her when she touches it. And a serial murderer is targeting the Shadowhunters of London, killing under cover of darkness, then vanishing without a trace.

Now Cordelia, James, and Lucie must follow the trail of the killer through the city's most dangerous streets. All the while, each is keeping a shocking secret: Lucie, that she is attempting to raise the dead; Cordelia, that she has sworn a dangerous oath of loyalty to a mysterious power; and James, that he himself may be the killer they seek.