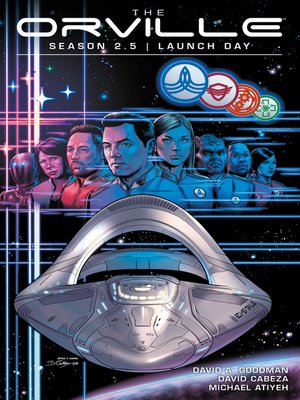 View more libraries...
Board the starship Orville and adventure through space on these new missions set between seasons two and three of Seth MacFarlane's hit sci-fi TV show!

Executive Producer David A. Goodman writes a double feature that has Captain Ed Mercer and crew investigating an enigmatic alien device and contemplating the consequences of intervention when a primitive civilization faces an off-world threat.

In "Launch Day," when seemingly hostile Krill ships cross into Union space, the Orville intercepts. Ed learns they are en route to a planet that left the Planetary Union decades ago under mysterious circumstances. Scans have discovered a moon-sized construct above the planet, and the Krill intend a preemptive strike against the presumed weapon. But is it?

In "Heroes," Lieutenant Talla Keyali returns to a planet she surveyed as an Ensign when a quantum signature on the surface suggests significant technological advances since her last visit. Instead, she discovers a spacefaring species has subjugated the locals, transforming their once idyllic society into a grim mining operation. Stymied by the Union's hesitance to provoke hostilities, Talla must consider how far she's willing to go to help these people and the repercussions of doing so.