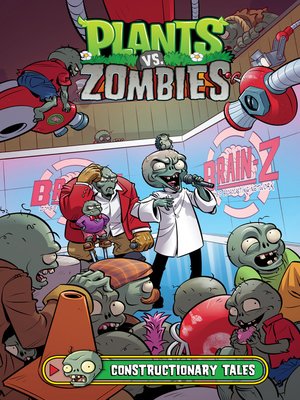 View more libraries...
The battle to protect Neighborville continues!
A behind-the-scenes look at the secret schemes, ridiculous plans, and craziest contraptions concocted by the bizarre Zomboss, leader of the zombie army, as he proudly leads around a film crew from the Zombie Broadcasting Network.
Crazy Dave has some silly schemes and convoluted contraptions of his own, though, to protect Neighborville's citizens. With his niece Patrice, neighborhood hero Nate Timely, and his own army of powerful plants and strange inventions, Dave's ready to counter any frightening invasion that Zomboss can think up! Eisner Award-winning writer Paul Tobin (Bandette, Genius Factor) collaborates with artist Jesse Hamm (Batman 66, Hawkeye) for a brand-new Plants vs. Zombies graphic novel adventure!