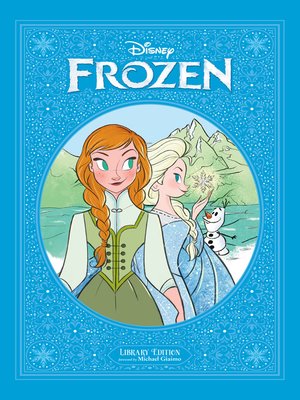 View more libraries...
Original comics with Elsa, Anna, Olaf, Kristoff, and Sven in a deluxe oversized hardcover. Featuring a foreword from Michael Giaimo, Production Designer of Frozen and Frozen 2.
Join the sisters and their friends in four stories of adventure in their kingdom of Arendelle. When Anna meets Mari of Vesterland, they explore all the different jobs Arendelle has to offer—but are they in over their heads? Meanwhile, Elsa is occupied with a mystery in the western woods. Then take a trip with Anna, Elsa, and everyone, to the kingdom of Snoob to reunite Kai and his long lost brother! Along the way, the group encounters dangerous mountain bridges, wild animals, runaway wagons, and strange music, but also helpful surprises! Later, back in Arendelle, when the group sets out to find Olaf's friend, a courageous girl who has run off to face the world alone, you'll get a glimpse into Kristoff's past and understand what he has overcome to become who he is today. Finally, in a story that leads in to Frozen 2, Elsa and Anna embark on a journey exploring the past and present, in a search to recover a hidden treasure from their mother, Queen Iduna.
Don't miss out on these novella-length stories that bridge some of the gap between the end of Frozen and the beginning of Frozen 2. The library collects Frozen: Breaking Boundaries, Frozen: Reunion Road, Frozen: The Hero Within, and Frozen: True Treasure, and includes a gallery of beautiful cover art, as well as a foreword from Michael Giaimo, Production Designer of Frozen and Frozen 2, who consulted on the art for these stories. The hardcover case is a deluxe printed foil paper with a soft touch finish and selected areas of gloss for a multi-textured look and feel with different levels of sparkle and shine! This library edition is a must for all fans of Disney Frozen!