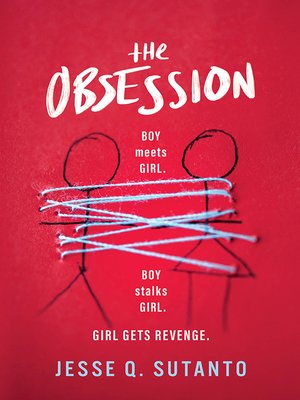 A fast-paced teen revenge-thriller from the author of Dial A for Aunties, The Obsession will keep readers on the edge of their seats until the very end.

Logan thinks he and Delilah are meant to be.

Delilah doesn't know who Logan is.

Logan believes no one knows Delilah like him. He makes sure of it by learning everything he can by watching her through a hidden camera. Some might call him a stalker. Logan prefers to be called "romantic".

Delilah is keeping secrets though, deadly ones. There's so much more to her than meets the eye.

Logan is determined to make Delilah the heroine in his twisted fantasy and he'll do anything to get what he wants.

Delilah is done with the men in her life controlling her. If Logan won't let her go...she'll make him.

"Sutanto has crafted a page-turning work of suspense that questions the line between romantic 'research' and stalking in the age of the internet, analyzing the roles played by abuse, misogyny, racism, and violence in contemporary relationships."—Booklist

"Set against a Northern California private school backdrop, the sensational plot is riddled with twists that come at a furious pace...A suspenseful page-turner."—Kirkus Reviews

"This tense, quick-moving thriller is also a thought-provoking story about the different shapes of abuse. Fans of high-drama fiction with a dark edge, like Karen McManus's One of Us Is Lying or Gretchen McNeil's #murdertrending, will be hooked."—School Library Journal