Powerful Prayers Against the Activities of Satan 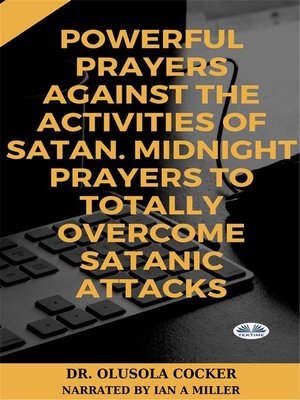 View more libraries...
It is now time we Christians realize that God has given us the power, the right information through the Scriptures to overcome satanic attacks. God is on our side. The weapon of our warfare is the scriptures and if we use it right, the world, the flesh, and the devil will be continuously defeated. The Lord Jesus Christ has provided all of our victories. He used the same tools He has provided us in winning the battle. His victory is our victory. It is, therefore, our responsibility to use these weapons the scriptures to our advantage. When you use the scriptures in any situation you find yourself, you'll thank God for the tools of victory He has provided. In life, there are enemies whose aim is to use pain and pleasure to make us blind and miserable for life. Who is this enemy? It is the Devil and Satan. According to the book of Revelation 12:9–10 which says, The great dragon was hurled down—that ancient serpent called the devil, or Satan, who leads the whole world astray. He was hurled to the earth and his angels with him. Then I heard a loud voice in heaven say: "Now have come the salvation and the power and the kingdom of our God, and the authority of his Messiah. For the accuser of our brothers and sisters, who accuses them before our God day and night, has been hurled down. One of the strategies of Satan against you is that He lies, and is the father of lies. Onces you know that Satan is a lier and the father of all lies, then He is already defeated. According to the boo of John 8:44 which says, "When he lies, he speaks according to his nature, for he is a liar and the father of lies" Also in John 8:44 which says, Satan "has nothing to do with the truth, because there is no truth in him" We are dealing with the essence of falsehood and deception. The second strategy is Satan controls and blinds the minds of unbelievers According to the book of 2nd Corinthians 4:4 which says, The god of this age has blinded the minds of unbelievers so that they cannot see the light of the gospel that displays the glory of Christ, who is the image of God. The third strategy is Satan also does signs and wonders. According to the book of 2 Thessalonians 2:9, which says, The coming of the lawless one will be by how Satan works. He will use all sorts of displays of power through signs and wonders that serve the lie, The fourth strategy is Satan tempts people to sin. According to the book of Luke 22:3–6 which says, Then Satan entered Judas, called Iscariot, one of the Twelve. And Judas went to the chief priests and the officers of the temple guard and discussed with them how he might betray Jesus. They were delighted and agreed to give him money. He consented and watched for an opportunity to hand Jesus over to them when no crowd was present.
PUBLISHER: TEKTIME

Religion & Spirituality Nonfiction
Powerful Prayers Against the Activities of Satan