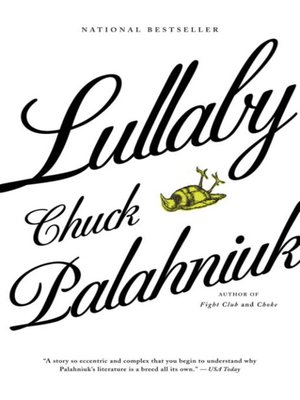 View more libraries...
NATIONAL BESTSELLER • From the author of the New York Times bestseller Choke and the cult classic Fight Club, a cunningly plotted novel about the ultimate verbal weapon, one that reinvents the apocalyptic thriller for our times.
"A harrowing and hilarious glimpse into the future of civilization.” —Minneapolis Star-Tribune
Ever heard of a culling song? It’s a lullaby sung in Africa to give a painless death to the old or infirm. The lyrics of a culling song kill, whether spoken or even just thought. You can find one on page 27 of Poems and Rhymes from Around the World, an anthology that is sitting on the shelves of libraries across the country, waiting to be picked up by unsuspecting readers.
Reporter Carl Streator discovers the song’s lethal nature while researching Sudden Infant Death Syndrome, and before he knows it, he’s reciting the poem to anyone who bothers him. As the body count rises, Streator glimpses the potential catastrophe if someone truly malicious finds out about the song. The only answer is to find and destroy every copy of the book in the country. Accompanied by a shady real-estate agent, her Wiccan assistant, and the assistant’s truly annoying ecoterrorist boyfriend, Streator begins a desperate cross-country quest to put the culling song to rest.