The Sphinx of the Ice Realm 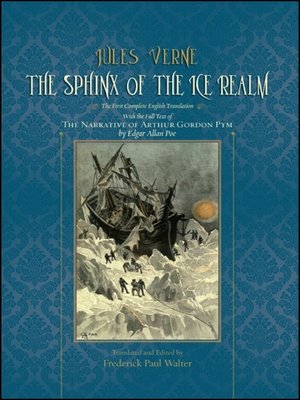 View more libraries...
The first complete English translation of Jules Verne's epic fantasy novel.
Decades after Edgar Allan Poe's longest and weirdest tale, The Narrative of Arthur Gordon Pym, was published—the protagonist disappearing into the misty, mystifying Antarctic seas; his fate unknown—Jules Verne took up the challenge to answer what had happened to him. In The Sphinx of the Ice Realm, he penned the most amazing journey of his fabled career: a voyage across the bottom of the world! An astonishing mix of manhunt, sea story, scientific speculation, and polar nightmare, Verne's epic fantasy novel appears here for the first time as a new and complete translation by noted Verne expert Frederick Paul Walter. The book is a treat for any fan of science fiction and fantasy, and includes many fascinating notes for students and scholars alike. In addition, the book features a complete, reader-friendly rendition of the original Poe tale that sparked Verne's uniquely imaginative response.
Jules Verne was born in 1828 into a French lawyering family in the Atlantic coastal city of Nantes. Though his father sent him off to a Paris law school, young Jules had been writing on the side since his early teens, and his pet topics were the theater, travel, and science. Predictably enough, his legal studies led nowhere, so Verne took a day job with a stock brokerage, in his off-hours penning scripts for farces and musical comedies while also publishing short stories and novelettes of scientific exploration and adventure.
His big breakthrough came when he combined his theatrical knack with his scientific bent and in 1863 published an African adventure yarn, Five Weeks in a Balloon. After that and until his death in 1905, Jules Verne was one of the planet's best-loved and best-selling novelists, publishing more than sixty books. Other imaginative favorites by him include The Mysterious Island, Hector Servadac, The Begum's Millions, Master of the World, and The Meteor Hunt. Verne ranks among the five most translated authors in history, along with Mark Twain and the Bible. Frederick Paul Walter is a scriptwriter, broadcaster, librarian, and amateur paleontologist. A long-standing member of the North American Jules Verne Society, he served as its vice president from 2000 to 2008. Walter has produced many media programs, articles, reviews, and papers on aspects of Jules Verne and has translated many Verne novels, including Amazing Journeys: Five Visionary Classics, also published by SUNY Press. He lives in Albuquerque, New Mexico.

Fantasy Fiction Science Fiction
The Sphinx of the Ice Realm