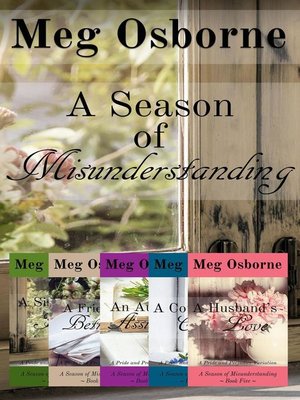 All five books in the Season of Misunderstanding series collected into one volume.

A Sister's Fault
Jane Bennet has been gifted an opportunity and she is not afraid to use it, feigning illness in order that she might remain a little longer under the Netherfield roof, and hopefully move one step closer to securing Mr Bingley's heart. She doesn't expect her sister to arrive, bedraggled and covered in mud, ready to spoil everything she is working for!

Intent on avoiding both Elizabeth Bennet and her manipulative sister, Fitzwilliam Darcy whisks Charles Bingley back to London, abandoning Elizabeth to her own obstinacy, convincing himself he cares nothing for her.

Elizabeth Bennet is bound for London – to stay with her Aunt and Uncle Gardiner and escape a sisterly feud dividing Longbourn. She knows only one thing will restore Jane's friendship to her, and is determined to use her time in London to reunite her sister with Mr Bingley, even if that means crossing paths with Mr Darcy once more.

Rushing North with Charles Bingley, Colonel Fitzwilliam can't help but acknowledge the absence of such reckless love in his own life. Poised to make a change, how will this new love survive a trial nobody expected?

A Husband's Love
Mr Darcy and Elizabeth Bennet have finally acknowledged their long-growing affections for one another and plan to marry as soon as possible. Lizzy ought to be completely happy. But with one sister still estranged from her and another whose own happiness looks set to be usurped she has her work cut out in ensuring her whole family – and not just her – might face a happier future.