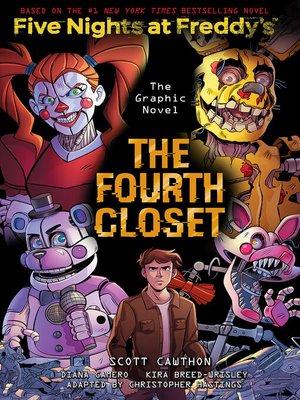 From the creator of the horror video game sensation Five Nights at Freddy's comes this pulse-pounding graphic novel adaptation of the bestselling trilogy's thrilling conclusion!

What really happened to Charlie? It's the question that John can't seem to shake, along with the nightmares of Charlie's seeming death and miraculous reappearance. John just wants to forget the whole terrifying saga of Freddy Fazbear's Pizza, but the past isn't so easily buried.Meanwhile, there's a new animatronic pizzeria opening in Hurricane, along with a new rash of kidnappings that feel all too familiar. Bound together by their childhood loss, John reluctantly teams up with Jessica, Marla, and Carlton to solve the case and find the missing children. Along the way, they'll unravel the twisted mystery of what really happened to Charlie, and the haunting legacy of her father's creations.

Told through delightfully scary artwork from artist Diana Camero, and with even more horror than ever before, fans won't want to miss this graphic novel adaptation straight from the mind of Five Nights at Freddy's creator Scott Cawthon.