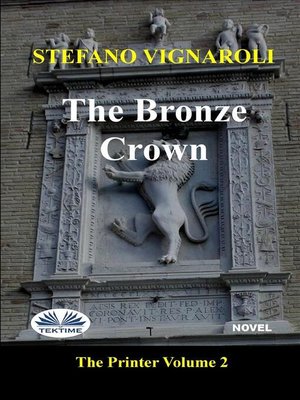 View more libraries...
Year 2018: from the icon of the Palace of the Lordship of Jesi the bronze crown to symbolize the royalty of the city, always above the rampant lion, disappears . A new enigma to be solved for the scholar Lucia Balleani who, having finally met the love in the young archaeologist Andrea Franciolini, she has to rediscover with him some unknown aspects of the life of her ancestor Lucia Baldeschi. So let's return, together with our two heroes, back in time to half a millennium, to discover how people lived among the alleys, squares and palaces of a beautiful city in the Marche region, famous in the world, then as now, for being the birthplace of Emperor Frederick the II. "But neither one of them, looking up over the portal and dwelling on the rampant lion's shrine, could escape a detail, which brought an exclamation to their mouths, almost in unison, as if they were one person: "The crown!".
Bernardino, the printer, is lying in desperate conditions in a room at Santa Lucia hospital. Cardinal Baldeschi died suddenly and left the city government vacant. Will young Lucia Baldeschi finally take the reins of government and prevent Jesi from falling into the hands of enemies who have always been pressing at his doors? Certainly, one cannot leave the government in the hands of four corrupt nobles or, worse, entrust it to the papal legate sent by the Pope. But Lucia is a woman, and it's not easy to take on roles of power, traditionally handed down to men. And Andrea, her love, what happened to her, after escaping the scaffold and disappearing in the wake of the Mancino? Will he return to the scene to help his beloved? Or will controversial events lead him to other shores? And we also remember the parallel story, that of the scholar Lucia Balleani, our contemporary, who perhaps has finally met the love of hes life, the one who will take her by hand to discover with the reader new arcane secrets. Love and death, esotericism and logic, good and evil. These are just some of the ingredients that give rhythm to this new investigation, focused on the mysterious disappearance of the bronze crown, once placed above the rampant lion of the main palace of Jesi, that of the Signoria. Once again, the past is intertwined with the present, through the parallel vicissitudes of the protagonists of the present day and their namesake ancestors. A comely lady and haughty regent of the Aesina Republic, Lucia Baldeschi is divided between the obligations of the reason of state and love for the fugitive knight, the brave leader Andrea Franciolini. Between history and legend, the action ranges from the severe buildings and dark secret passages of an underground Jesi, to the open countryside of its Contado, populated by shepherds and monks during the day and animated by magical rites during moonlight. Then there are the intrigues of the palace, the feuds between the lords and the battles; those between the armies and against the pirates, from Urbino to Senigallia, up to some of the most suggestive gorges of the Apennines. The sixteenth century, characterized by light and shadow, is divided between the cult of reason and the practice of esotericism, of which the characters of the novel are the faithful mirror. In their demeanour, as well as in their merits and defects. In their footsteps, among sensational discoveries and brilliant intuitions, the quarrelsome lovers, Lucia and Andrea, from the Jesi of the twenty-first century will come to the truth in the sign of a timeless love.
PUBLISHER: TEKTIME