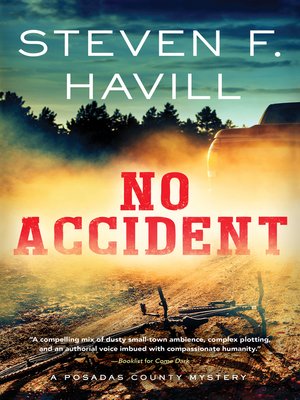 Good cops have no use for coincidence

When a driver slams his pickup truck—twice—into a tandem bike being ridden by Carlos Guzman and his fiancée, Tasha, in Briones, California, it's more than a simple hit-and-run; the driver clearly intended to harm them. Undersheriff Estelle Reyes-Guzman gets the call with the news of her son's accident and wastes no time racing to his side. She is greeted by Police Captain Eddie Mitchell, formerly of Posadas County, who allows Estelle to "consult" on the investigation—but only to a point.

While Carlos struggles with critical injuries, an employee at the bike shop where Carlos bought the tandem is found shot dead in a dumpster—the same man who had borrowed the truck that mowed down Carlos and Tasha. The local cops aren't convinced there's any connection between the two crimes. Not a believer in coincidence, Estelle pursues every possible angle with a cop's determination to solve the case, and a mother's resolve to keep her son safe at any cost.