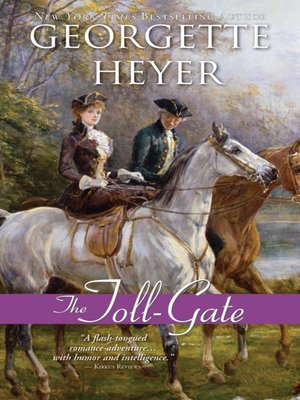 His exploits were legendary...

Captain John Staple, back from the battlefront, is already bored with his quiet civilian life in the country. When he stumbles upon a mystery involving a disappearing toll-gate keeper, nothing could keep the adventure-loving captain from investigating.

But winning her will be his greatest yet...

The plot thickens when John encounters the enigmatic Lady Nell Stornaway and soon learns that rescuing her from her unsavory relatives makes even the most ferocious cavalry charge look like a particularly tame hand of loo. Between hiding his true identity from Nell and the arrival in the neighborhood of some distinctly shady characters, Captain Staple finds himself embarked on the adventure—and romance—of a lifetime.

Praise for The Toll-Gate:
"Spritely and good fun."—New York Herald Tribune
"Once again Georgette Heyer has directed her comic genius along the fictional highway of early nineteenth-century England, but this time...cleaves with refreshing persistence to the commoner levels of life."—Chicago Sunday Tribune
"Told in elegant prose with exceptionally humorous dialogue by the Queen of Regency romance."—Good Book Guide