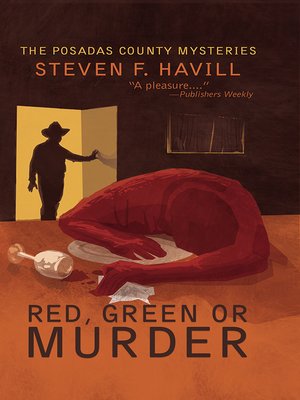 Former Posadas County Sheriff Bill Gastner, now a New Mexico Livestock Inspector, is enjoying a day on Herb Torrance's ranch - soaking in the sun, counting a small herd of cattle, and thinking about meeting an old friend back in town for lunch. But suddenly a light breeze stirs the dust, a horse spooks, and Bill finds himself ferrying a broken cowpuncher in the back of his SUV, headed out to meet an ambulance.

Moments later, Bill's day goes from bad to worse. He is summoned by undersheriff Estelle Reyes-Guzman to investigate an unattended death. Too impatient to wait for Bill, his friend George Payton decided to eat lunch on his own. A couple of bites later, he collapsed - dead of an apparent heart attack. But something isn't right.

Then the small herd of cattle Bill had just counted is found wandering down a county highway. But there's no sign of cowpuncher Pat Gabaldon or his boss' $40,000 truck and livestock trailer. Forced into two tangled investigations, Bill faces one of the most complex cases in his 35-year career.